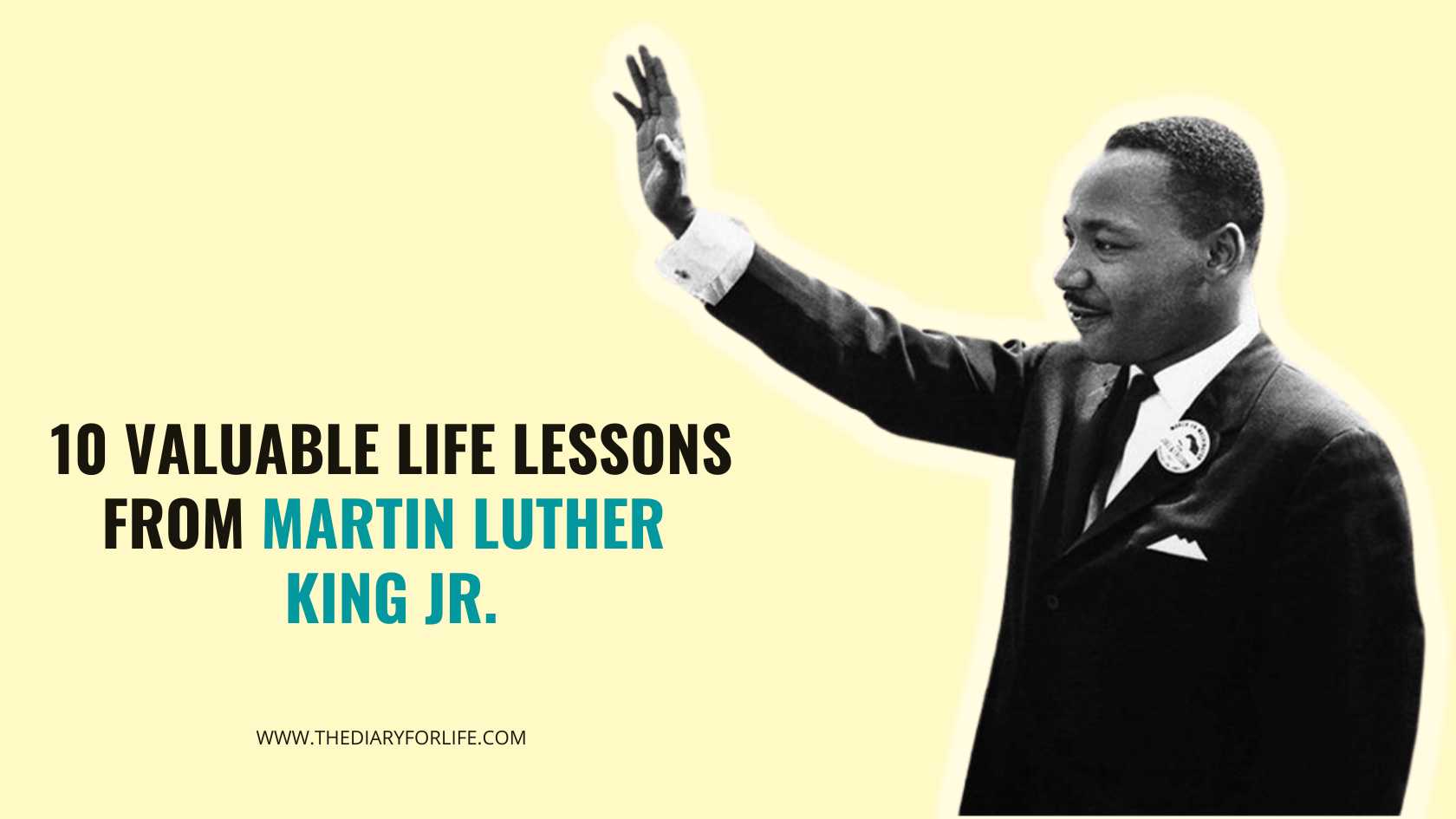 Martin Luther King Jr was one of the revolutionary men of America. An influential personality at the age of 20, the youngest Nobel Peace Prize receiver at 35, and was murdered at 39. He was a black person who fought for civil rights and created history.

He is also known as an orator. He is also remembered for his speech “I have a dream.” While fighting for justice, he was imprisoned 29 times. But this didn’t stop him from leading the movements to end segregation and prejudice prevalent in the United States at that time using peaceful means.

There are many life lessons that we can learn from this great personality. Here are 10 valuable life lessons from Martin Luther King Jr that you should never forget.

Speak Until You Are Heard

Never give up on your thoughts and dreams. Your opinions are important, and they truly matter. Besides, you should make constant efforts to evaluate and present your words before people.

Don’t give up on your ideas if people do not believe in them. Always remember that you need to stand up for yourself. You should stop expecting that people will stand up for you.

Non-violence Is Key To Peaceful Existence

King was initially not aware of “Gandhi” or “Non-violence.” In fact, he used to keep guns with him for self-defense against attackers. He was a man of violence before he came across the ideas of Mahatma Gandhi on non-violence.

Later, he learned about Gandhi through his writing. King Jr saw him as a “Working Spirit Of God.” His visit to India made him realize the potential of non-violent methods for bringing justice to oppressed people. He never got a chance to meet Gandhi in person, as he was 19 when Gandhi was assassinated. But King followed his ideas till his last breath.

King was arrested for a sit-in at Rich’s department store as black people were not allowed to be served at departmental store lunch counters. He was jailed and suppressed with hard labor. This caused a revolt in the country, and many people supported King.

During that time, elections for the presidential position were happening in the country. Richard Nixon and John F. Kennedy were the candidates for the election.

King had good relations with Nixon, but Nixon didn’t help King because he feared that white people would turn against him. However, Kennedy fought for King and released him two days after he was sentenced. Later, Kennedy won the presidential elections.

Like Nixon, Kennedy had a choice. But he knew that wrong is always wrong. During his last days, King wrote, “in the end, we will not remember the words of our enemies but the silence of our friends.”

Never support a wrong action, no matter how tense the situation is. At the same time, always stand up for the right no matter how many are ignoring it. Be remembered as a supporter of truth rather than a concealer of the truth.

Be consistent in your actions and determined in your mindset. You must never stop until your goal is achieved. Taking action constantly with increased focus will surely lead you to your destination.

You will get multiple obstacles in your way, but your actions shouldn’t be paused. Whenever you are stuck in a situation, just remember that you have come this far, not to stop but to go ahead.

It doesn’t matter where your friends or coworkers are from. We all are humans and share equal rights. Our color doesn’t represent ourselves. Our character does. We must have faith in each other and respect everyone.

After all, white doesn’t mean anything if there wasn’t black to be defined as its opposite and vice-versa. The difference in our shades and behavior is what makes our world colorful and lively.

A crowd can do anything if they share a common goal and have a strong leader. A person as an individual can reach somewhere. But a person, along with a powerful team, can reach anywhere in the world. Your ideas as an individual do matter, but sharing them with the right people matters more.

When a group of people has the same purpose, they can never get distracted and diverted from the true sense of togetherness. This togetherness will lead to consistent efforts and success.

Martin Luther King Jr has given the best leadership lesson. If a leader makes people work for his dreams, then people will eventually give up and drive away. However, when he makes them work for a common purpose, the team can achieve anything in the world. King had a strong purpose, and so did his supporters.

King was greatly inspired by Mahatma Gandhi and the idea of ahimsa(non-violence). It is indeed impressive how a man wearing only a dhoti touched the lives of millions of people and encouraged them to fight for freedom without using weapons.

Everything is possible if you work consistently on it. You can achieve everything you want and be whatever you like. Believe it or not, this is how the world works.

Only Love Can Erase Hate

When you hate someone in return for hate, nobody will be happy. But if you love everyone, including those who hate you, a small light of love and kindness is lit in their heart too. The other person will reciprocate if he catches your feelings right.

When you return love for love, then love doubles. The same thing happens with hate. Though, it would be wiser to love. Love ignites positivity in our souls. Spread this positivity and happiness everywhere. People will feel heaven around you.

We judge people by their actions and then forgive them for their mistakes. Though true forgiveness never judges by the past of a person.

Usually, you ponder for a while, developing hatred and then forgiving a person. However, you should simply forgive the person right away.

Don’t let the ink of hatred spill on your heart. Keep it pure and simple.

Fear makes you weak. Embracing your fear is a way to overcome this weakness. Every person in this world has fear and will have it till the end of their life, but that does not affect our cycle of life.

It is we who decide if we want our fear to take control over our actions or to let it slip and take the right action. Feel the fear but use it to empower your motives. Remember, as positivity spreads, so does negativity, but you have to forget it and continue the journey of your life.

You can create history if your thoughts are bold enough. Understand your true potential and take inspiration from great personalities like Martin Luthe King Jr. You must never stop until your voice is heard. In the end, consistent efforts always pay off.

Hurting people will do no good but create more enemies. Obviously, you don’t want a crowd of haters but a team of supporters. A team is most successful when people share a common goal and a powerful leader. Finally, no matter what the circumstances are, always support the truth.

Also read: How To Be Compassionate To Others