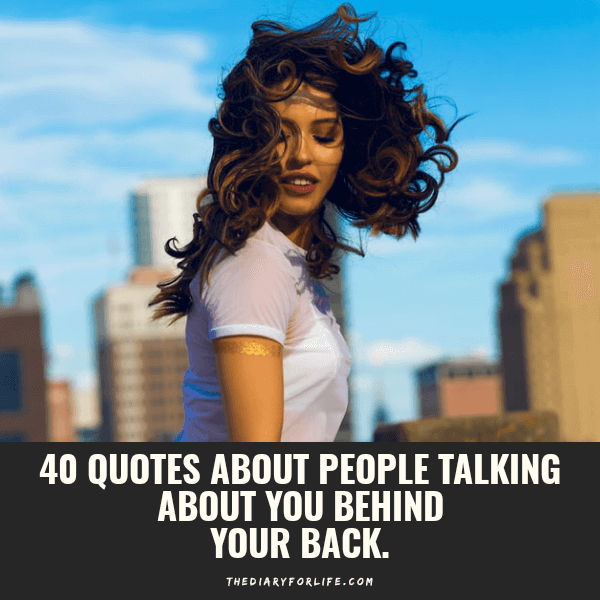 Looking for some meaningful quotes about people talking about you behind your back? If yes, you’re at the right place.

We all are good and bad in someone’s story. The fact is that we all know someone who talks about us behind our back and at the same time we also talk about someone behind their back. It may be consciously or subconsciously. And most of us never admit that we are doing it.

Keep reading to understand why people talk about you behind your back.

Quotes For People Talking About You Behind Your Back

If you are talking about me behind my back, remember that you are behind me for a reason.

Why don’t try to fix your own problems instead of discussing mine?

If you are talking behind my back, don’t be surprised when I’ll burn the bridges between us.

Keep my name out of your mouth unless you are praying for me.

It’s funny how you’re nice to my face. It’s hilarious how you talk shit behind my back. And it’s downright comical that you think I’m unaware.

Fake friends are like secret haters and once you stop talking to them they start talking about you.

It’s funny how the people who know you the least, talk about you the most.

People talking about you behind your back actually belong behind you.

It doesn’t matter how nice you are, once you leave the room, someone always starts a conversation about you.

Having a friend who stays loyal behind your back is truly a blessing.

My name must be addictive because these bitches can’t live without my name on their mouth.

I keep doing, you keep talking and I’ll get both success and fan club.

Meaningful Quotes About People Talking about You Behind Your Back

There is a line that defines – what type of talking behind someone is healthy. And what type is not?

We talk behind the back of the ones who are dominant.

The first thing to consider is – whom do we talk behind? We usually talk behind the people who are dominating us. Or even, because we don’t want to get into arguments.

People who think they are right all the time and the ones who tend to dominate are mostly talked behind. These people usually insult us on the face or behave in such a way that they get hard to convince.

Now, these people have already caused us some kind of disturbance. This cannot be simply accepted as it is. This disturbance can’t stay along with us for long. And the easiest way out is talking behind.

If talking behind relieves you, you are tricking your ego.

Most of the time, you talk behind just to satisfy your ego. You think you are smarter. And want to prove yourselves so. And the easiest way that could prove yourself smart, at least to your ego is gossiping.

Talking behind gives you the courage to speak whatever you want to. You are actually omitting all your feelings out, without any fear of offence.

At times, talking behind is the safest way too. You are getting out of the thing that is disturbing you, and there happen no significant grudges. But it can also make you weak. So, decide carefully when you should take the stand and when you shouldn’t.

The need for talking behind arises if you are not strong enough upfront.

All that is said behind, if said on the face, will result in disaster. You won’t have any relations. And life becomes such a mess.

What makes us all talk behind? Our opinions. And not able to deliver these opinions on the face, make us talk behind.

Not only on the face, but this social etiquette thing is also too complex to understand and follow. So we all prefer to talk behind, but with trustworthy people.

Dissatisfaction, humiliation, insult, jealousy, all these make us talk behind. Not only this, at times, but we also talk behind just for fun.

Everyone talks behind, but no one admits.

Talking behind is not something to be ashamed of. Usually, the ones who talk behind are defamed. However, the thing is that everyone talks behind.

There is this unsaid unwritten rule – you should talk behind, but cautiously. Not everyone is an ear for the behind talks.

Choose those whisper ears wisely. There are certain rules to follow while talking behind. These rules are unwritten, unsaid, and unrevealed. You need to learn them on your own.

Talking behind is not cowardy, but is foolish.

Talking behind is considered bad, whereas it is not. It is just fooling our brains and the utter waste of time.

If you think, you are disturbed and need to talk it out, you should. But you should take care of your time spent and the most important thing – with whom you are sharing your behind talks.

Talking behind someone is actually a foolish thing you could do to your ego.

In relation, if you are suppressing the other one. They will talk behind.

Do you remember how you became friends with your friends? I bet, you would have become friends over gossips.

If you are not gossiping among yourselves, you are not true friends. Have you shared how bad your other half is, with your besties? Of course, only your besties know how you are and your better half is. And for the rest of the world, you are a sweet couple.

Why this urge to talk even behind your significant other, to bestie? This is because they are suppressing you. They are not giving you the needful freedom and space.

Popular Quotes On People Talking About You Behind Your Back

It’s not about who is real to your face. It’s about who stays real behind your back.

I don’t regret my past, I just regret the time I’ve wasted on the wrong people.

It is hard to deal with someone who smiles and pretends to like you to your face and sticks that eight-inch blade in your back when you turn around.

Remember, if people talk about you behind your back, it only means you are two steps ahead of them.

Don’t tell me what was said about me. Tell me why they were so comfortable to say it to you.

Better to have an enemy who slaps you in the face than a friend who stabs you in the back.

The world doesn’t change in front of your eyes, it changes behind your back.

Anyone can stay true to your face, it’s the people who stay true behind your back that really count.

Avoid him who talks sweetly before you but tries to ruin you behind your back, for he is like a pitcher of poison with milk on top.

More Quotes About People Talking Behind Your Back

Sometimes it’s not the people who change, it’s the mask that falls off.

Just because they say they’re praying for you in your face, doesn’t mean they aren’t laughing at your struggle behind your back.

A true friend will tell you the truth to your face – not behind your back.

Whoever gossips to you will gossip about you.

Isn’t it kind of silly to think that tearing someone else down builds you up?

Ask me, don’t ask about me.

If you can discuss it behind my back then why can’t you say it to my face?

Before you “assume” try this crazy method called “asking”.

Keep talking about me behind my back, and watch God keep blessing me in front of your face.

Everyone is getting talked behind.

We all are good and bad. We all are right and wrong. We all talk behind and get talked behind.

Talking behind is healthy sometimes. You just need to take certain precautions.

Talking behind always is not good. you should avoid talking behind in public places or in places with mobs. You can talk behind sometimes just to let go of the things that are disturbing you but keep it a secret. Choose the people and place wisely. It isn’t bad, but you shouldn’t yell out and tell everyone that you are doing it.

Also, Know the difference between where talking behind is healthy and where it becomes toxic because, in the end, it will have a major influence on your self-esteem.

Also read: 60 Inspirational You Are Enough Quotes To Remind You Of Your Worth