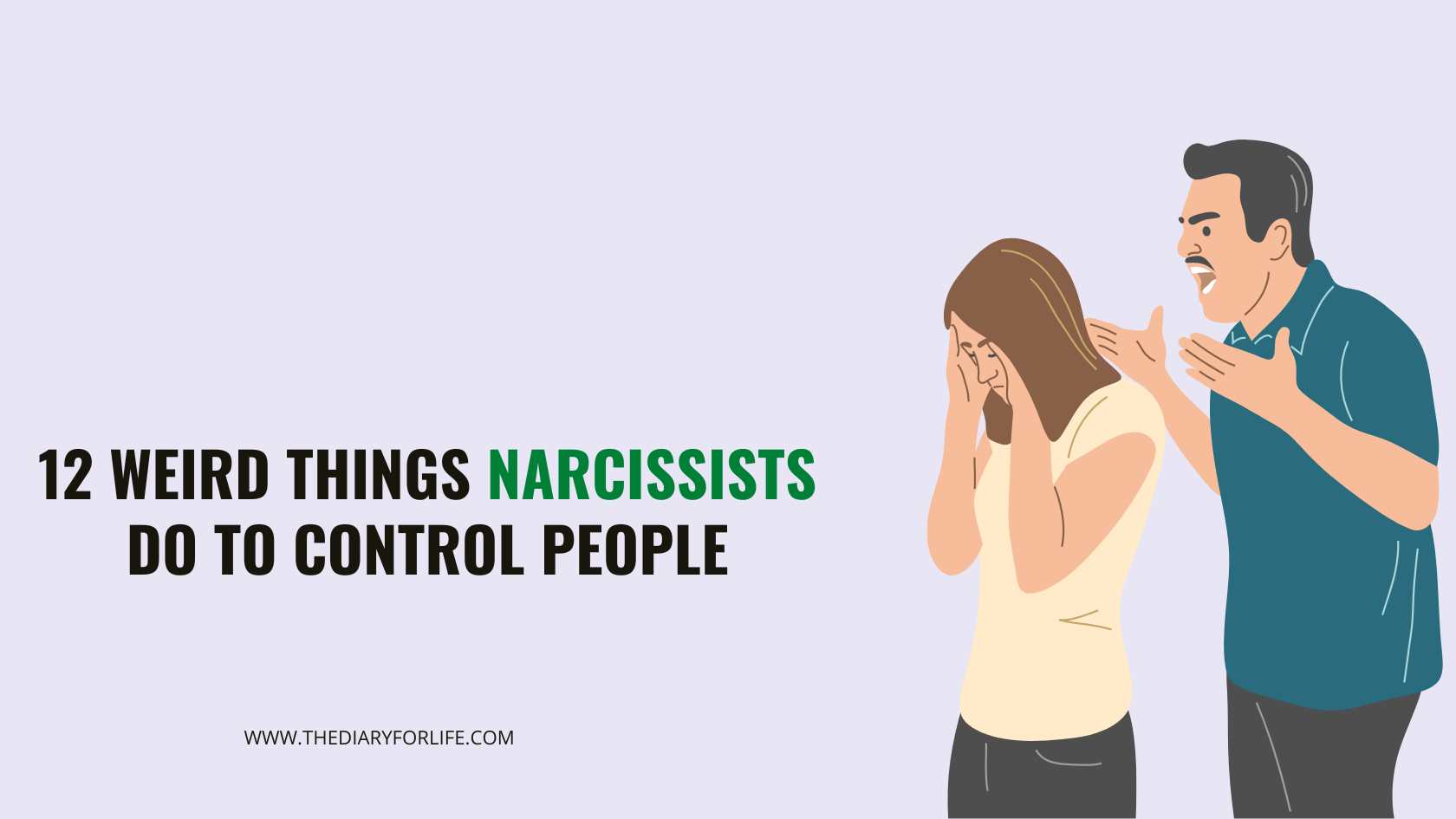 We all have dealt with narcissists in our lives, whether it is at home, high school, or the workplace. Although the term may sound a bit too fancy to hear in our day-to-day lives, you may be surprised to find one sitting right next to you. Hard to believe? You will be convinced by the end of this article, so keep reading!

Before we delve into the 12 weird things narcissists do, let us first clear the air around the term ‘Narcissist’. A narcissist is a person with a high degree of self-obsession or self-importance who believes they cannot be wrong, whatsoever.

They are also constantly hunting for attention wherever they go and are seen directly or indirectly underestimating others. They intend to make you walk in their shoes and think the way they do rather than simply accepting and respecting your zone.

Let us take a look at some of the most common and weird things narcissists do to manipulate or control your thoughts and actions.

They Play the Blame Game

It happened because of you. You did so. You should have done this. You must have done something. These are the favourite phrases of a Narcissist. No matter what goes wrong in your life, they will manage to find a way to turn the bottles to you.

Blaming you for the slightest of things is one of the most common and weird things narcissists do.

So, if you slip off the floor and get hurt, they will blame you for not walking carefully. They will make you feel ugly on the inside and plunge you into low self-esteem for some or the other reason.

In other words, they will hold guns on you (not literally) when you need to be empathised with and loved. And the worst part? They play all the blame games without you realising it’s one.

They Don’t Let You Speak Much

Conversations are a fun and friendly way to unwind yourself, aren’t they? You exchange thoughts, listen, and also feel heard. But hold on!

That is not the case when you are trying to have a word with a Narcissist. These folks are known for making every conversation about themselves.

They are not good listeners and bother least about your thoughts and emotions while trying to express themselves in a dominating fashion.

Interestingly, you may see such behaviour especially when you share about a positive event or incident in your life and they come up with something to brag even harder.

Narcissists do not quite stick to one thing. For instance, they will mock you for carrying an umbrella when it wasn’t cloudy enough.

But if it rains, they will not think twice before snatching your umbrella and opening it for themselves first. Another instance could be the way they adore you in public but go all rude in private.

Dictators are often notorious for treating the masses ruthlessly. Intense domination, serious lack of empathy, and obsessive importance attached to self are all traits of a dictator which keep them from being in our good books.

But that is not the case with narcissists. They somehow manage to justify the inhuman actions of the dictator and explain how the victim was wrong which invited all the bad that happened to them.

Although a Narcissist may not outrightly agree with all the unkind actions of a dictator, they will try to subtly explain the dictator’s side of the story.

They Barely Give a Compliment

Did you just get honoured for doing some good for society, or did you buy a new vehicle, or are simply wearing your dream dress?

Nope, a Narcissist will be the last person to compliment you. They are so used to pointing things out or easily criticising every other thing, that positivity has no room in their thoughts or words.

Rather they will pass a subtly bitter remark like – why would you spend your precious time helping people you don’t know?

Or, congratulations on your new car but why didn’t you choose the x model instead of this? It leaves you juggled in the vicious cycle of self-doubt.

They Have Double Standards

A typical Narcissist will stop you from/ accuse you of doing something, but will merrily do the same. That’s another weird thing narcissists do.

For example, they will show discomfort if you are watching television even with normal volume, but will comfortably watch the same with an overly high volume when they are holding the remote.

Hyperbole is their way of expression! They are skilled at making a hullabaloo out of nothing.

If you just spilled some water on the floor while doing a chore, they will blabber for hours about how it could have caused them or their baby to slip and break their bones or even die.

They Don’t Let You Relax

Have you ever noticed someone who asks you to send a mail or bring a glass of water or switch on the AC just when you are about to lay back on your couch?

Bingo! You have a Narcissist around you. They just cannot see someone setting down other than themselves. Their behaviour is wired to constantly direct and dominate others.

If nothing else, they will at least argue about something when you are about to fall asleep.

They Digress Out of Context

Narcissists end up framing a situation in a way that’s simply not related. So, if you tell them you had a great day and enjoyed a lot on your solo trip, they will tell you that you don’t need them and should go on more such trips.

They may even prove you have been ignoring them lately and that it’s high time you part ways, finally leaving you in guilt. That is how they move things out of context while always keeping it about themselves and not about you.

They Think Everyone is Jealous of Them

Narcissists tend to believe that almost every other person around them is super-jealous of their looks, success, personality, and whatnot! This can be directly linked to their self-obsession.

They are forever under the impression of being above and beyond everyone else, which makes people jealous.

So, even if you have a different opinion about something, they will assume you are saying so because you are jealous. It becomes toxic especially when the narcissist is one from your home as it harms personal relationships and takes a toll on the mental health of those involved.

They Often Treat You Coldly/Silently

Again, a narcissist will plunge you into guilt by treating you silently. Whether they are a friend, partner, sibling, parent, or a colleague, they will often go silent for days from the middle of nowhere and leave you occupied with all bad thoughts.

It puts you in a situation where you unknowingly end up finding your own mistake and apologising for things you didn’t do. That is another way you fall prey to the weird things narcissists do.

They Engage in Unfair Competitions

Being competitive is a healthy trait but only when you are being so on equal parameters. For instance, a fish must not compete with a bird as both are born with different capabilities. However, narcissists tend to forget the silver lining between the two.

They are often found to compete even with the weaker ones, be it a child, an old person, a differently-abled individual, or a financially weaker person. While underestimating others makes them feel good about themselves, it breaks the confidence of the other person.

Dealing With Weird Things Narcissists Do

Have you already identified the narcissist(s) around you by the end of this blog? Understandably, dealing with these weird things narcissists do can be extremely exhausting.

After all, you don’t just deal with their behaviour, but also with the thoughts that they throw your way. But don’t you worry! You are not alone.

We all have that one narcissist doing all the weird things they possibly can to manipulate us. So how do you save yourself from all the trauma?

Well, that depends on who the person is and the gravity of the situations you’ve been facing. Ward them off your life if possible, be patient, and you may even consult a therapist for them and yourself to fight the adverse situation together!

Also read: 12 Traits Of A Narcissist