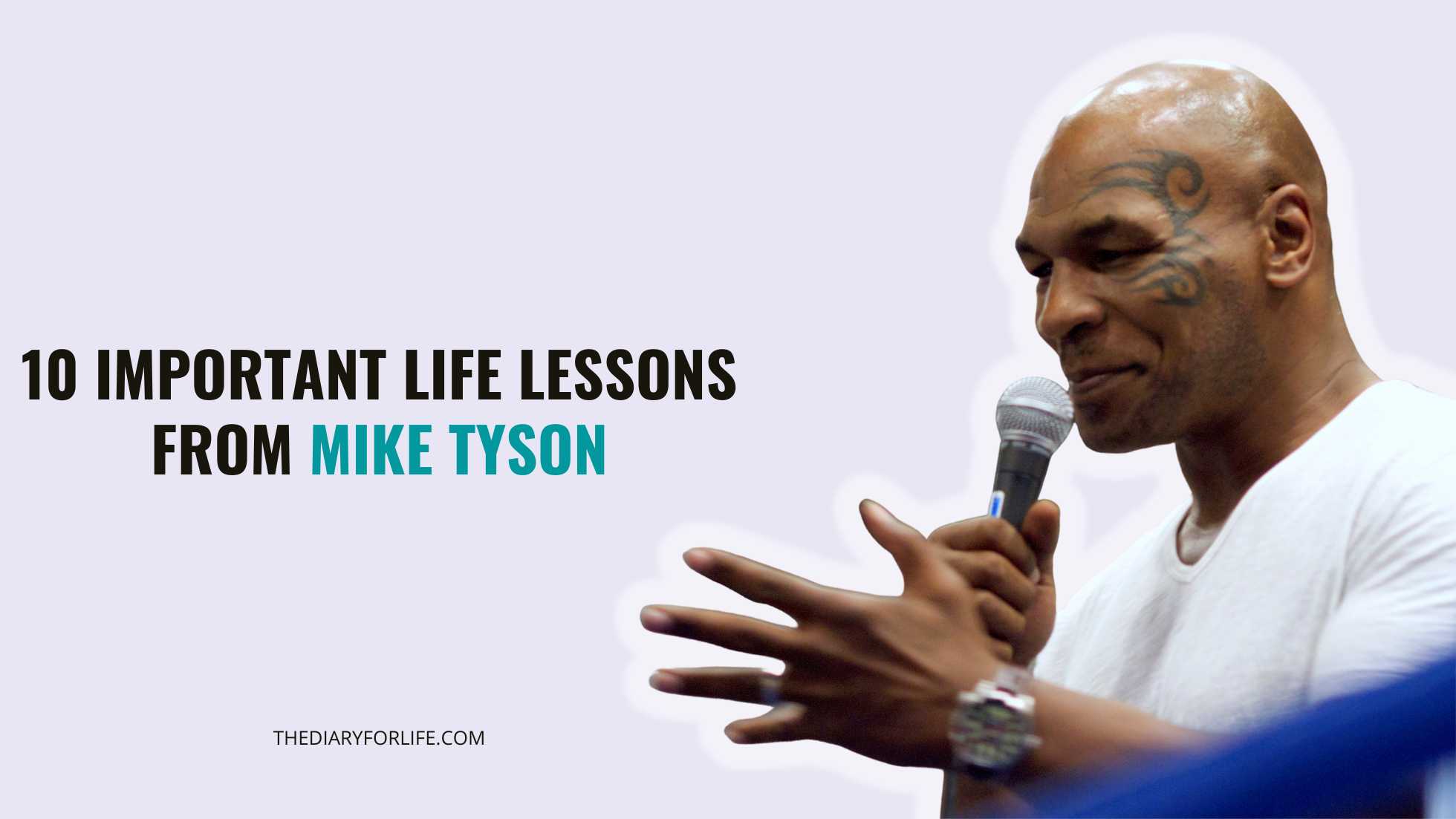 Mike Tyson has changed from being the world’s baddest man to an approachable person whose presence no longer causes your underwear to leak.

From one of the worst areas in America, he rose to become the youngest heavyweight champion in history, became a multi-millionaire, went to jail, returned to boxing’s biggest stage etc.

There is a lot of variety in that life, and his extensive travels undoubtedly added to his broad range of life experiences.

Mike Tyson was imparting knowledge to both his loving admirers and those he terrified the living daylights out of throughout all of his turbulent experiences; sometimes you simply had to squint to see them.

Others were concealed in well-crafted quotes, like this one about the media: “I wish that you guys had children so I could kick them in the fucking head or stomp on their testicles so you could feel my pain because that’s the pain I have waking up every day.” Some of these nuggets were obvious, while others were tucked away in well-formed quotes.

Here are some of the meaningful life lessons from Mike Tyson.

It All Begins With Your Mindset

If you have the appropriate mindset, you will eventually acquire the degree of competence required to attain your goals even if you don’t have the skills to do so.

Everything requires patience, and if you have the attitude and mindset to persevere while telling yourself something will work, you’ll start to become an expert at that particular ability or craft.

Adopt the right mindset if you don’t already have it. 10% physical, 90% mental.

Dream, But Also Commit To Your Dream

Having a desire for something or your own dream is pretty simple. Just a little amount of creativity will do. The majority of people have some form of ultimate objective or desire, but only half of them are dedicated to working toward it.

They don’t want to put up the effort, the difficult work that is required, and most importantly, they don’t fully believe that it is possible.

Everyone has a plan, but only some individuals will start implementing it, and only a small percentage of those people will continue doing so even after facing challenges along the way.

Do It For Greatness And Mental Clarity

Mike Tyson didn’t compete solely for financial gain. Pure grandeur and mental tranquility were his motivations. It’s challenging enough to succeed after merely intending to accumulate wealth, but it also implies that you can only experience so much happiness.

There will always be a void in your life caused by them. In contrast, when striving for greatness, you get enormous satisfaction from your work and the outcomes you produce.

Tyson was content when he was winning fights because he loved winning. Although the money that followed only made him happy, it was never the cornerstone of his professional life.

What other people may think or say about you is irrelevant. They may think that, but the truth is that only you truly know yourself. Are you content with your identity?

If so, what exactly is the issue? You’ll have fans and detractors alike.

It’s their decision. You must not allow that to prevent you from being and doing in the way you want to. Anyone who has ever achieved greatness has always been detested by some. A prominent example of this is Mike Tyson.

Recognize Yourself As The Best

Hardly everyone who has achieved success has ever told oneself they weren’t the best before and just started to say that after succeeding.

You will ultimately turn out to be this person if you start out on your journey thinking that you are the finest. By believing you are the best, you will become the best.

Your mental state is improved, and you’re more motivated to keep overcoming the obstacles standing in your way of achievement. Since nobody else can do it if you can’t.

Recognize And Embrace Your Pain

You’re going to experience suffering on the arduous path to success. To go where you want to go, you must put up with pain. Learn to love the pain and enjoy it instead of whining about the discomfort you are experiencing along the route.

Long-term, you will gain a lot from this, and you will develop a habit of finding the greatest thrill in pain.

Although it’s hard to imagine, that’s what it turns into. You will have a surge once your discomfort starts to produce effects. You are aware that it is empowering you, enhancing your strength, and contributing to your greatness.

The Choice Of What Happens Is Entirely Up To You

You have less time than you think, and your life has a start, middle, and finish, just like everything else.

The middle section is within your control. Just keep in mind that you are always in control, at least until your life ends. It can be spent however you want. Make it excellent.

Decide To Put In Hard Work

It’s quite simple to succumb to the urge to miss training, additional hours of work, studying, and other obligations one day.

Tyson would not succumb to any pressures that would prevent him from putting in the additional effort required. Someone else is working hard while you’re off having fun and partying.

You might believe it’s not required and that it’s okay to forego the extra little amount of work occasionally. But whether you become the best or not may depend on that slight difference in effort.

Utilize Each And Every Opportunity

There are far too many people who squander opportunities entirely. Not every opportunity presents itself twice; some are only available to you for a little period before being snatched away.

This way, when you realize that the wonderful opportunity you were given won’t come around again, you won’t regret declining anything.

We all want to think we’re pretty perfect, but the majority of us actually have defects that, if left unattended, can make us feel inferior.

While these can be harmful to your social and professional lives, if you can embrace them, take ownership of them, and work to better yourself, the possibilities are endless. The first step to gaining success and happiness in life is to be content with who you are, flaws and all.

These are some of the life lessons from Mike Tyson which we all could implement in our lives. Tyson continues to embrace his complex position in the public eye, for better or worse. He might enjoy greater popularity than ever before.

Whether intentionally or not, he continued to use the same tool that turned him into a villain and rode it to an improbable career after his formal retirement. Tyson may currently be back in the ring, but his greatest legacy may be how he dealt with life outside of the arena.