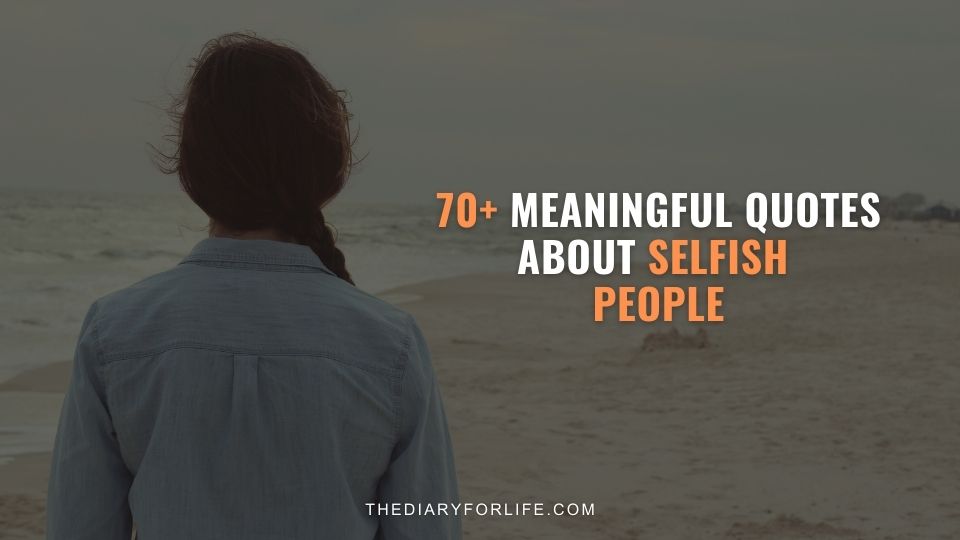 Selfishness spoils relationships and creates gaps and crevices that never heal. Friends are not supposed to behave selfishly.

Here are some meaningful quotes about selfish people:

Selfish people suffer from a vice that makes them helpless and vicious who can be pitied but never befriended.

Selfish individuals are the most self-centred people on Earth. Creating relations with such people can bring doom for those who make such a choice.

If you are planning to live a meaningful life, to begin with, cut down selfish friends from your life.

Selfishness is the gateway to other sins. It is only second to vanity, the most beloved iniquity of Evil.

Selfishness is like a poison that can give birth to nothing but barrenness so still that it smells foul in no time.

Selfishness is twisting others’ thoughts and activities to benefit your survival and existence.

Thinking about your gains can deprive others of their wants and choices, which is what is scarier about being around selfish people.

A selfish core gives birth to the two most derogatory activities of the world- brainwashing and mind games.

When someone is desperate about themselves, they turn selfish. Take it easy; no one escapes the claws of death on this Earth.

Selfishness is a trait that festers and feeds on the good of others.

Loving you and caring for your own heart and mind is not being selfish- it is a necessity.

People who love themselves know the thin line between self-love and selfishness.

Selfish people often take selflessness as a weakness. But then they do not know that it equally takes nothing to be selfish.

Popular Quotes About People Being Selfish

Foolish, selfish people are always thinking of themselves and the result is always negative. Wise persons think of others, helping them as much as they can, and the result is happiness. Love and compassion are beneficial both for you and others. Through your kindness to others, your mind and heart will open to peace.

Almost every sinful action ever committed can be traced back to a selfish motive. It’s a trait we hate in other people but justify in ourselves.

Great achievement is usually born of great sacrifice, and is never the result of selfishness.

Selfishness comes from poverty in the heart, from the belief that love is not abundant.

Intensely selfish people are always very decided as to what they wish. They do not waste their energies in considering the good of others.

It’s usually the selfish people who are loved the most. They do what you deny yourself, and you love them for it. You give them your heart.

Selfish people also tend to have victim mindsets… Their actions plant seeds of loneliness; then they cry upon the blooming.

The most selfish people are the ones who do not love themselves.

Friendships built on selfish motifs and principles are like castles built on sand.

Selfish friends resemble your shadow. Even though your shadow is the closest to you but it can never provide you with the shade you desire in life.

Selfish friends only have themselves in the end.

You will exist for your selfish friends only when they need something.

A selfish man would shriek at the thought of making a sacrifice. Test your friend by asking them to make a small sacrifice, and you would know if you still want to be their friend.

It is better to be alone than be with selfish friends.

Selfish friends do not believe in free-living.

Do not be with people who try to suck everything from you, leaving you with little or nothing. These are selfish men who will kill you slowly.

Forgive selfishness, for there is no cure for it but do not keep it close.

Selfish people lack the right beliefs, and for them, love is limited.

Selfish people have not learned that true joy lies in an unselfish dance, out in the bright sun beside your best friend who just won a game of chess with you.

It is impossible to be both selfish and happy.

Insincerity lurks in the heart of selfish men.

Selfish people must be used for your advantage but in the right way.

Money and wealth is the favourite subject of selfish people.

A selfish man is a thief.

Live life wearing your brightest smiles, and life can be made a little less selfish each day.

Kind souls can also be selfish, but then kindness is a hood beneath which hides selfishness.

Doing right for yourself is not being selfish; it is called taking care of yourself.

Selfish people often blame the world for turning them into what they are.

Resources are scarce, and selfish hoardings are making it scarcer.

A sin is a sin since it gives rise to many cyclical processes when executed- Selfishness is one such sin.

When people cross their own selfish boundaries, they become sociopathic.

Quotes About Selfish And Ungrateful People

Pursuing your interests does not make you selfish but stopping others from pursuing their interests definitely makes you one.

Selfishness is the mirror image of your self-respect. They look similar but are as different as your image is from you.

Selfishness often mirrors greatness to impress people in the beginning. Once selfish people have what they want from you, only then can you see them truly.

Selflessness cannot be taught to selfish souls who often come wrapped in it.

Selflessness needs to set its boundaries. Every selfless soul is home to millions of selfish people. To keep from giving senselessly, map your boundaries perfectly.

Being generous is not enough. It is essential to practice giving to the right people. Only then will your giving truly matters.

When planning to give, be vigilant enough to forbid selfish people from taking away your gifts since selfish people merely hoard what needy people will put to use.

Selfish people often steal people’s original ideas and uplift themselves, depriving others of their needs.

Before you call anyone selfish, judge how much you will give when in that man’s shoes.

Selfish parents leave significantly little room for their children’s growth. Mostly they are busy thinking about themselves.

Being a parent is easy and a selfish need. Raising the child in the right way is an unselfish act a parent must rise to.

Inculcating the right thoughts in children and running with those thoughts can make a parent unselfish and loving.

As a parent, It is your responsibility to be concerned with your child’s happiness rather than your petty insecurities and jealousy.

Instead of treating your child like how you were treated. Treat them with the same love, affection and attention you wanted from your parents while growing up.

It is the selfish parents who are to blame. Pay attention, be involved in your children’s lives. They are your legacy, your only hope.

You can’t expect to have a deep relationship with a shallow person.

Yet there are still people who confuse individualism and selfishness.

To be happy, we must not be too concerned with others.

When it’s impossible, it’s better to stoop to compromise, without resisting and without complaining. People who complain are selfish.

That man who lives for self alone lives for the meanest mortal known.

Who is the selfish person?

Selfish people are usually defined as the ones who are concerned excessively with themselves: seeking or concentrating on their pleasures, advantages, or well-being without thinking about others.

In the words of Art Markman, PhD, professor of psychology at the University of Texas and author of Brain Briefs, SELF-selfish individuals are more likely to prioritize themselves over others.

“When we call someone selfish (as a trait), we mean that they consistently put their own goals ahead of those of other people.”

What are some common traits of selfish people?

We are all aware that the world is full of selfish people, and dealing with selfish people can be challenging. Here are some research-based common characteristics of Selfish People:

1) They are more concerned with their own needs than the well-being of others.

2) They don’t have empathy.

3) They usually do anything to get what they want and prioritise their needs.

5) They don’t care about the consequences.

What do you say to a selfish person?

Here are some meaningful quotes for selfish people:

One loyal friend is worth ten thousand selfish friends.

Glory built on selfish principles is of no value.

Don’t fear the enemy that attacks you, but the selfish friend that hugs you.

Better to have an enemy who slaps you in the face than a selfish friend who stabs you in the back.

There is very little difference between selfishness and self-care. If people are prioritising themselves first, over you, that’s fine. But when people want to make you inferior to them on purpose, that’s definitely a selfish act.

Know yourself better to understand others better. Distant yourself from people who are not bettering your lives. Stay happy and surround yourself with happy vibes.

Also read: 50+ Meaningful Quotes On Parents Love Everyone Must Read