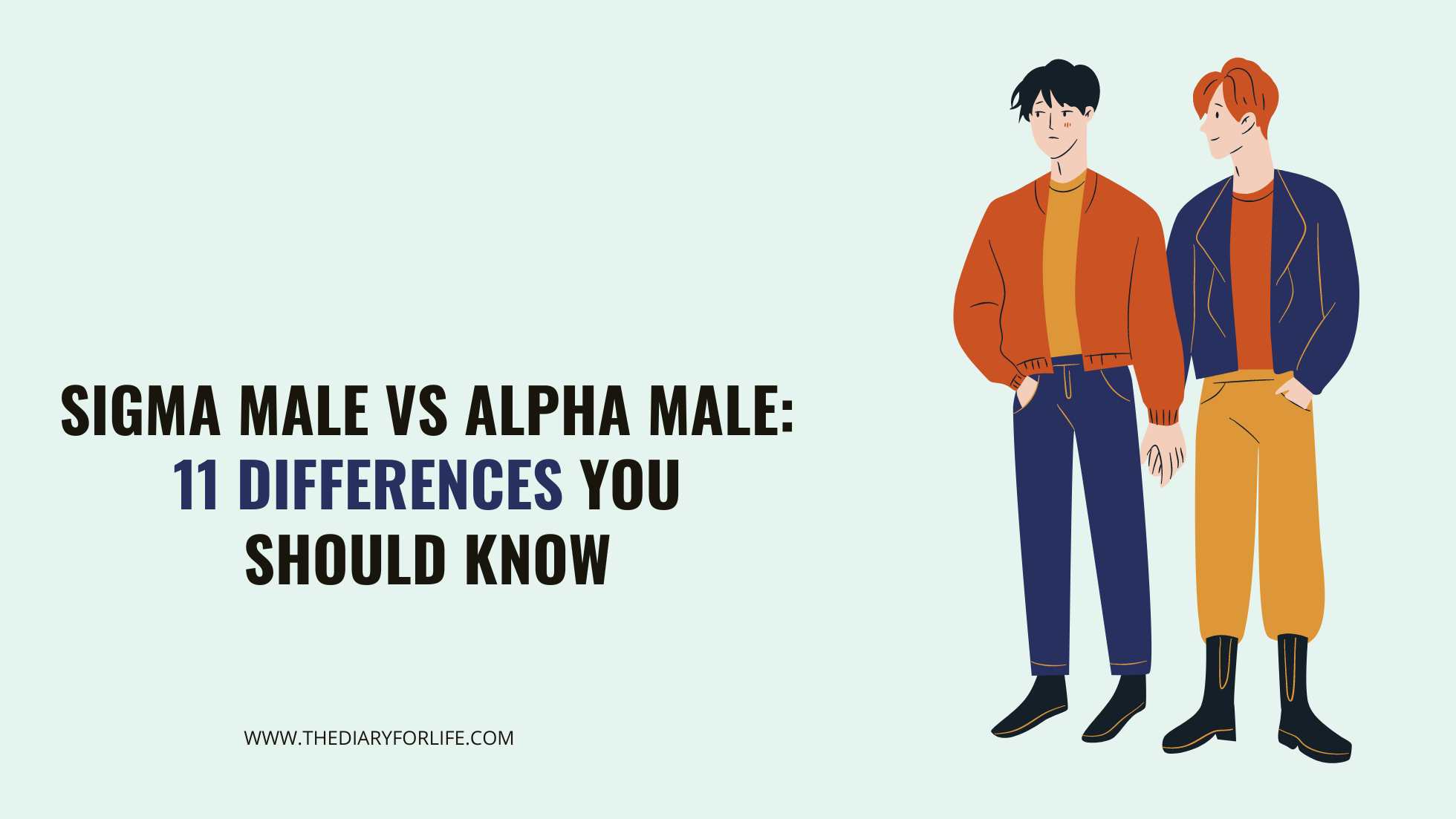 We’ve moved past the era of debates that revolved around girls versus boys! The times have changed and so have the ways of identifying different individuals. The hottest argument of the contemporary world is sigma male vs alpha male!

The distinctions are as interesting as the terms, and we’ve put it all together for you. While Alpha males are adorned for their energy, power, dominance, and extrovert nature, the Sigma males are praised for their silent self-confidence and thoughtfulness and are known for their reserved nature. Read on to learn more about alpha vs sigma males!

Males are bestowed with a slew of traits, and it won’t be hyperbolic to say that they are all distinct in their way. However, studying them categorically is more fun, especially with modern terminologies like alpha males and sigma males. Here is a list of the 11 most intriguing differences in alpha males vs sigma males you must make a note of!

One of the most striking differences between sigma males vs alpha male is their way of interacting in general. A sigma man likes to stay under the shell rather than going all outspoken like an alpha. However, their introverted approach does not keep them from coming through as composed and charismatic personalities. They are not hesitant or shy but practice thoughtful silence.

As against alpha males who love to engage in social interactions, are talkative, and bold, sigma males are pretty slow and laid back in developing social bondings. They’d instead prefer to spend a lot of “me time” instead, either exercising their hobbies or hanging out with a select few. Isn’t that an interesting point to consider in sigma vs alpha male?

Similar to their subtle approach towards social engagement in general, sigma makes are also mildly dominant, unlike the alphas. The best way to describe them would be that they like to lead rather than dominate and without being explicit or loud as such. They like to observe things and make a silent move to work things out.

On the other hand, alpha males are known for their apparent dominance. They are quite loud and clear about their expectations of others and are often found to possess a “my way or highway” attitude. While both personalities are unique per se, they have varied degrees of social acceptance.

For example, while alpha males could be criticized for their sometimes overly dominant nature, sigma males could be called out for being “too subtle” given the generic perception of a man being rough and tough.

How Confident Are They? : Sigma Vs Alpha Male

Typical alpha males like to be known and appreciated for their looks, success, or personality in general. They are also found to boast about their lifestyle and, in the process, (sometimes) demean others. They also seem to be over-confident at times and are often quoted as braggarts.

If they successfully tame their over-the-top attitude, they can make really good leaders and motivating personalities. Sigma males are also confident, but they do not sound arrogant or boastful. They like to stay grounded and are silently aware of their positive attributes, which adds to their charm.

The Need for Social Validation: Alpha Male Vs Sigma Male

Alpha males are naturally outspoken and love to be seen and heard all the time. While they are super-confident about their actions, they also often count on social validation as they are more interested in what people think of them.

In a way, they identify themselves to be at the top of the social hierarchy and therefore find it necessary to keep up with the societal norms while fearing that anything otherwise may directly hurt their reputation.

In contrast, Sigma males bother the least about their image. They are aware and confident about their intentions and do not think twice before going against the flow.

Sigma males enjoy solitude. They do not like to give out their energy and be the center of attraction, unlike alpha males.

It helps them stay connected with themselves and make the best decisions in any given scenario. In fact, going overboard and being extra social might leave them uncomfortable.

An alpha male, on the other hand, is a go-getter. They make quick yet mindful decisions and hold no regrets, come what may. While sigma males sometimes end up getting vulnerable to loneliness, alphas are found to dive out of dark times and move forward in life.

Both personality types have their unique ways of dealing with and healing.

Alpha males turn out to be extremely stubborn in some situations. They are too rigid to mold as per the need of the hour and feel offended or hurt when things don’t exactly go as planned. They don’t like to keep room for any ifs and buts.

However, Sigma males go a little easy on things and are open to new ideas or changes. Their adaptability scales better than the alpha males and has the knack for getting things done without creating a fuss it.

They are also better capable of empathizing and carrying a solution-oriented approach rather than whining about the wrongs in the basket.

When considering sigma male vs alpha, you may be surprised to find out that sigmas assert their stand and creatively convince the other person about their thoughts as compared to alphas (who overly dominate).

Nor do they hesitate to convey their disagreements with you or are unhappy about your behavior. In contrast, Alpha males are observed to be more aggressive, which may fan the flame during sensitive situations.

That said, both approaches have their unique upsides and downsides in both personal and professional spaces.

Who Is A Good Listener?

When thinking in terms of sigma males vs alpha males, Sigma males are good listeners, which makes them all the more likable while alluring you to put your guard down and give their ideas a chance.

On the other hand, alpha males may easily turn a conversation into a monologue. They end up suppressing your thoughts or opinions and ascertain their knowledge instead.

People also find them narcissistic in the way they keep the conversations self-centered.

Both sigma and alpha males have a high quotient of self-awareness. However, alpha males lag a little behind in working on their weaknesses. This is also because they find it difficult to break their ceiling of self-esteem and accept their negatives.

Sigma males are in a better position to outgrow and become better and more successful individuals as they are keen on looking at all the dimensions of a coin, be it others or themselves. They have a higher emotional quotient and behave more patiently; this makes them more desirable, whether it’s an office or a relationship.

Alpha males do not find the need to dig a lot into their decisions, be they personal or professional. This helps them grab the best opportunities without spending time overthinking. That does not necessarily mean they make hasty decisions but are faster decision-makers.

This attribute is especially helpful in high-level executive positions that require you to make crucial decisions on the spot. Sigma males tend to spend a lot of time before arriving at a final decision.

Of course, they want to evaluate all the angles in a given scenario, but they often end up overthinking and losing out on the best opportunities.

This may also lead them to get trapped in self-doubt. Nevertheless, they can make the best, if not the quickest, decisions considering how patient and thoughtful they are.

Sigma males need to put in a lot of effort to be able to trust someone, which may hamper their personal as well as professional equations. They are sensitive on that end and often fear the negative consequences if the other person fails to live up to their trust.

This also makes them appear paranoid and skeptical of commitments. On the other hand, alpha males trust easily. This acts as an asset, especially when they are in a higher position, as having the trust of the higher official motivates the subordinates to be more productive and performant.

In a Nutshell: Sigma Male vs Alpha Male

No matter how stark the distinctions get in the burning debate of alpha vs sigma males, both types are characterized by one-of-a-kind traits, and both are attractive in their own ways. The outgoing, fierce, stringent, trusting, and dominating nature of alpha males make them suitable for impactful professional positions and also super-protective in relationships.

Whereas the calm, composed, introverted, confident, and on-point approach of sigma males makes them masterminds and best strategists in any field, they choose. Also, even if they take a little longer to enter into an emotional commitment, they know how to stick around even in adverse circumstances.